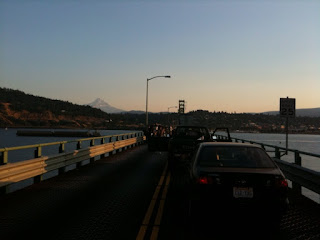 Bridge Up! Never saw that one before... 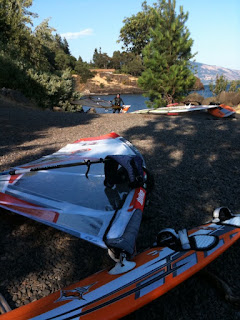 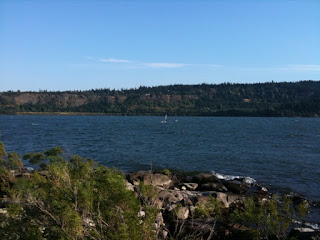 Swell and I got the place to myself 6pm 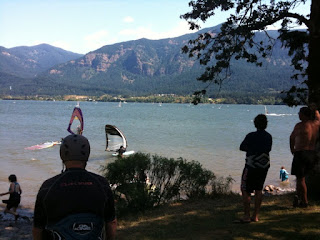 Bob's beach was the place for wind Sunday....

Well the 4m winds definitely were best on Thursday and Friday. Weekend
saw us do Swell on Saturday with the AM gradient holding .08 most of
day which meant 5m gear. Switched in the JP77 for old faithful, the
84FSW. Smaller than expected sailing groups on the weekend as the
declining forecast kept the masses home. Sailed until about 3 pm then
moved to the Hatchery where I sailed an evening sesh for a few hours
while watching the pros make wind in out in front of me. We hooked up
with Jim and Larry who Craig actually talked too on the water doing
long kite downwinder. Town was packed dinner at Full Sail and ice
cream at Mikes.

Sunday was near repeat but it started much stronger than Swell with
the Hatch packed as all the 17-23 winds were focused there. More MI
sailors as the Lansing crew from the demo tour are here sailing with
us. Pretty good am happily powered on 5m's until it dropped at noon
with temps everywhere at 100+. The heat wave is here and that's not
good for winds in the gorge.

We thought that was it but reports were Stevenson was the place for
winds now 20-28 - let's go. We arrived and it was in the 4.7-5m range.
Parking was packed but we rigged big and got some rides nice early
rides in this wide section of the Columbia. Nothing great but were
getting rides at yet another nice site and 4 pm though it dropped and
even the 5m's were not going to work. Great spot though we watched the
kiters next rip it up at their launch up wind (couldn't get Larry to
rig his kite as the launch is so packed). Great hook up to see Andy
and Callie (and future sailor Alec!) for dinner at Full Sail - these
guys have a great home base 50 minutes for HR. Yeah were jealous.

As I finish this it's east here on Monday morning-no winds likely from
the west until Thursday. It's going to be 100 inland and the desert to
so that means were ready to head home too. Off to breakfast at Bette's
and finally time to hit the shops - see you again next summer HR!
Posted by Chris Lyons at 11:57 AM 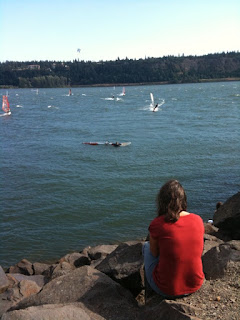 Hatchery rocking 4.7m for the crowds 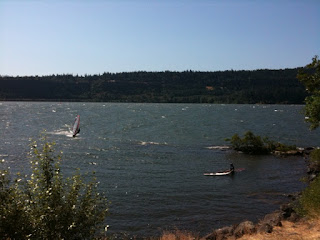 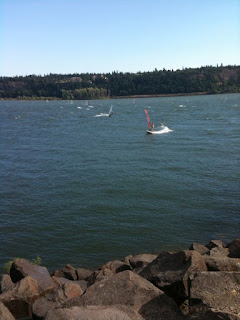 Day 2 and we get get lucky it's 20++ at Swell and the corridor is the
place to be. 4m's and the 77FSW and 83 Global Wave get the job done
for the morning sesh. 25 with gusts in the 30's keep the smiles on our
faces. Waves and a small crowd of the regulars make the locale seemed
indiscoveted by the masses. We sail until the winds drop a bit and
then in the late afternoon move east to the Hatchery.

Great evening sailing with the pros at the Hatch who are ripping it up
for the crowd at the Jibatorium. 4.7m worked perfectly with a short
spaced tall swell and winds 20-25. I swear the 77FSW planes in
anything and is an exact replica of the 84 only 15% smaller. Fun
sailing while watching shakas, geckos and loops happen right in front
of me. Evening sail ends at 8pm with a short drive to HR for brews and
burgers at Horsefeathers. More coming tomorrow if the gradient holds...
Posted by Chris Lyons at 2:41 AM

Gorge day 1 Live thru us! 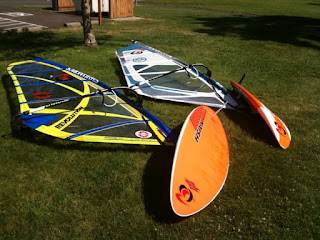 Gorge day one... Yeah those are 3.4's...
Short and sweet... day one had us at 3 sites starting at Dougs beach
where winds were tapping 40 on the first runs out. Craig on a 4m and
me on a 4.2m way too much on the OR side where it was 3.5. We sailed
for an hour or so and were getting beat up by gusty winds and a huge
curling swell in the river midsection. Whatta start, crazy conditions,
let's move before we die.

Next Maryhill rocks. Yes it's 32-39mph here with about 10 people out.
I get killed on a 4.7m and Craig works a 4.0 to perfection. But by 2pm
it's killing both of us and the 3.4m's need to come out. They work
well in the gusts but are so small when I duck jibe I miss the boom
they're so short (130cm). Great site and sailing peak winds in 40's
with PDX to Dalles gradient hitting .20 mb - the most I've ever sailed
in. Too much for us with the back and forearms begging for mercy.

Evening sesh = Arlington/Roosevelt. The best most solid 3 hours of
sailing (4.2) I've ever had. Sun, big waves abound, near 100 temps and
it's only 5 pm with about 30 sailors out. Just a great cap off to the
first day. We sail until 8 pm and have a 1.5hr. Drive back to HR.
Awesome site, day and conditions. We perfectly followed the peak winds
all day as the eastern push moved the gradient down the river toward
the desert. More coming tomorrow...yes it's on.
Posted by Chris Lyons at 1:21 AM

Another biking day and the winds don't seem to want to cooperate. This time Island Lake State Park doing 14.8 miles in 1:20. Brent joining in for a good ride that was dry and fast. Much better place when you loop the blue and yellow trails together!
Posted by Chris Lyons at 9:29 PM

Hardly worth the post, but with a suprise westerly breeze the boys all met up today at Metro. Armed with the 6.2 Alpha and the 107FSW I got about 2.5 hours of up and down winds. Nothing but patches and streeks of 20+ gusts to ride. Weeds abound too. We need some real wind now - looks like we'll have to head to the Gorge to find it!
Posted by Chris Lyons at 12:19 PM

Super fast and bone dry - thought I might have broke an hour but still not there yet... Got in 10.58 miles in 1:03 under the sun and nice 75 degrees. Great day on the trails with few people riding the heat of the afternoon - most in the lake. The new rear cog and chain had the Enduro trannie riding and switching so smooth - a great update. The bike was as solid as ever over some huge rock garden outcrops that now are really making some sections at speed very technical (= do not fall). Many thanks for my sponsors of the day Red Bull and Alleve. Pontiac is a great ride always...

Trail ituneage: The Becoming - Vol. 1, Kutless - To Know That You're Alive, The Wedding - Polarity, Skillet - Comatose
Posted by Chris Lyons at 8:40 AM 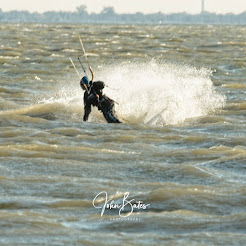